Big match fever in May and Gura’s dream come true

The most popular contest of the 44th Observer-SLT Mobitel School Cricketers of the Year is now on its fifth week as some of the popular inter-school big matches are about to begin after Sinhala and Tamil New Year vacation. 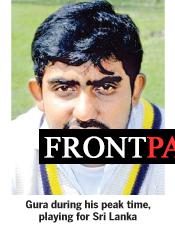 As the 2022 Most Popular Observer-SLT Mobitel School Cricketers contest is about to enter the month of May in ten days time, the season’s big matches is about to begin with the biggest one of the big ’uns – the Battle of the Blues between Royal and S. Thomas’.

As they look forward to the Battle of the Blues big match next month, Royal’s Ahan Wickramasinghe took a thrilling lead in the Most Popular Schoolboy Cricketer 2022 contest this week. Although the number of votes polled by all candidates was comparatively less due to back-to-back New Year and Good Friday holidays, Wickramasinghe took a close lead, extending his vote count to 3,598.

Interestingly, the 2022 Most Popular Schoolgirl Cricketer contest too had its early table leader being displaced. Last week’s leader Kaushini Nuthyanga of Anula Vidyalaya, Nugegoda was replaced by Chushadi Kaushalya of Dharmapala College, Pannipitiya.

Kaushalya took the lead with 2,108 votes while Nuthyanga took the second place in the latest count polling 1,901 votes. In the third place is Navodya Nethmini of Wadduwa MMV with 1,799 votes followed by Manudi Dulansa Nanayakkara of Princess of Wales College, Moratuwa (1,238) and Imesha Dulani of Devapathiraja College, Rathgama (1,078).

The big matches will always give a new rhythm as the young schoolboys and old boys get proactive with excitement and renew loyalty with true feelings for their schools.

These big match venues eventually turn out to be the annual meeting places for the old boys of the respective schools to meet, greet and swap yarns, especially those who are domiciled abroad flying down for the momentous occasion.

Most of the old boys living overseas usually plan their annual cricketing pilgrimage to Sri Lanka in March to meet their school buddies and go down memory lane. But that customary big match window is gone for the second time as school timetables continued to be affected by the Covid-19 until early January. But with the impact of the pandemic slowing down, the big match spirit could be experienced in May.

Winning the Sri Lanka national cap at the age of 19 years is something unique, admirable and memorable. Only a few cricketers have had the distinction of achieving that rare feat in Tests, starting from Arjuna Ranatunga playing for Sri Lanka in the inaugural Test in 1982.

Another such feat was achieved by former Nalanda captain Asanka Gurusinha – only the second from the Campbell Place school to be adjudged ‘Observer Schoolboy Cricketer of the Year’ after Roshan Mahanama.

Mahanama is the first Nalandian to win the Observer Schoolboy Cricketer in successive years in 1983 and 1984. After Mahanama’s dominance, yet another Nalandian, Gurusinha, won the coveted title the following year – 1985.

The 55-year-old former Sri Lanka cricketer and ex-cricket manager of the Sri Lanka national team, Gurusinha said that the Observer Schoolboy Cricketer of the Year title he won in 1985 was the turning point in his cricket career.

A member of the 1996 Sri Lanka World Cup winning team, Gurusinha said 1985 was a memorable year for him after winning the schoolboy crown.

“When Roshan Mahanama won this award twice in 1983 and 1984, I truly understood how prestigious it is to win the Observer Schoolboy Cricketer of the Year award. It was a rare honour and a rich award that not every schoolboy cricketer had the fortune to win,” he said in a recent interview.

“One has to be outstanding and be consistent right throughout a season to win that – work really hard to reach the pinnacle of school cricket,” he said.

Gurusinha said he was eager to win that title after watching the proud moment – when Mahanama won the award which was also an honour for his alma mater Nalanda. “I knew hard work and dedication with exceptional performance could take a schoolboy cricketer towards that goal. I successfully achieved my cherished dream as a schoolboy the following year,” recalled Gurusinha.

After an outstanding 1984/85 season for Nalanda, with a rich harvest of over 1,000 runs, young Gurusinha was adjudged the ‘Observer Schoolboy Cricketer’ in 1985.

“Winning the title gave me tremendous confidence and I started believing in myself more. In less than five months after that I made my Test debut for Sri Lanka,” he added.

When he was 19 years, Gurusinha was called up for national duty as a wicket-keeper, a role he performed in two more ODIs and one Test. But he gradually established himself as a one-drop batsman in the national team with many responsible innings that was taken notice of by the selectors.

“I am glad that the ‘Sunday Observer’ is hosting the awards show uninterrupted, thus encouraging the budding schoolboy cricketers. During our time, this was the only school cricket awards show by the Sunday Observer and we were eagerly looking forward to it,” he said.

Gurusinha was concerned about the dying spectator interest in school cricket, which had been at its best during his era. “One reason for that is that there is too much cricket being played. Live television coverage also discourages fans from going to the grounds. I could remember the Royal-Nalanda match in 1983. We were after five wins and Royal after seven wins. The Reid Avenue ground was packed,” he said.

The technically sound left-handed batter, who eventually turned out to be one of the most dependable one-drop batsman ever produced by Sri Lanka, made his ODI debut on November 3, 1985 in Sri Lanka’s fourth ODI against Pakistan in Hyderabad.

He played 147 ODIs for Sri Lanka to aggregate 3,902 runs inclusive of two centuries and 22 fifties to average 28.27. Just four days after making his ODI debut, Gurusinha won his Test cap on November 7, 1985 to play for Sri Lanka in the third Test against Pakistan in Karachi.

The reliable left-hander has represented Sri Lanka in 41 Tests and scored 2,453 runs with seven centuries and eight half tons, including a fluent 88 in his farewell Test innings. He has a Test average of 38.92 and a career-best score of 143.

He said that there is a vast gap between the present day school cricket standard and that of the Sri Lanka ‘A’ or national team. “There is a big gap now and you need to come out with an exceptional performance to make it to the national team. Fitness and sharp fielding play an important role and these aspects should be looked into from school level,” he said.

Nevertheless, Gurusinha sees a bright future for Sri Lanka cricket. “We must set one goal and work towards achieving that at all levels. High performance culture should work from school level with intense training and high fitness levels,” he said.

Physical fitness is a key area that helps make a complete cricketer, according to Gurusinha. “Fitness is very important, not only to play school cricket but even excel in studies with a sound mind. They must work hard with dedication. Just because one takes 50 wickets, he should not expect a direct place in the national team. Instead, he should keep on performing and maintaining consistency,” he said.

Gurusinha is an architect of Sri Lanka’s 1996 World Cup triumph, aggregating 307 runs – the sixth highest among all teams, with three half centuries in six matches to average 51.16.

Even in the last match of his Test career, he made a patient 88 off 239 balls against Zimbabwe at the SSC ground in September 1996.

“The Observer Schoolboy Cricketer of the Year show has not only produced top cricketers but also an international level umpire such as Kumar Dharmasena who still serves in the ICC elite panel. We must not forget to appreciate the tireless roles played by coaches and masters-in-charge, who render yeoman service,” Gurusinha added who also played a key role as the manager and selector of the Sri Lanka team.