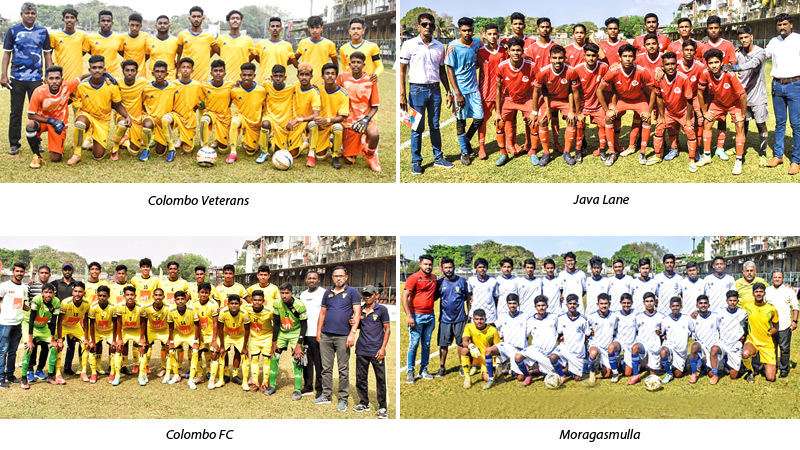 The two semi-finals of the second Inter-Club under-19 soccer tournament played for the Expolanka Youth Cup organized by City Football League will be out for a decision on March 5 (Saturday) and 6 (Sunday) at City Football League grounds. The matches are scheduled to kick off at 3.30 p.m each day. Colombo Veterans, Java Lane, Colombo FC, and Moragasmulla have confirmed their position in the semi-finals by winning their respective quarter-final matches. On Saturday, Colombo Veterans will take on Java Lane in the first semi-final. They are tipped to be one of the favourites of winning this year’s tournament as they possess a well-balanced side imbibed with several talented players. They were struck a major blow by losing their regular captain for this the semi final. Thusmika was booked with two yellow cards in the game against Baddowita United which will sideline him from this game.

Nevertheless, according to their team sources, they are still capable of turning tables with their remaining players. They defeated Renown (3-1), Rudra (3-1), and United (4-0) in the league stage matches before they gave the best over display against Baddowita United with a 4-1 victory.

On the other hand, their rivals Java Lane had mixed fortunes before qualifying to this stage. They started with a bang against their hometown team Slave Island XI defeating them 3-0 and went down to Colombo FC 0-2 but bounced back to notch up wins in their next two matches against Viking and Ferguson Youth with a similar result of a 2-0 wins. Then they created the biggest upset of the tournament edging out the mighty Saunders 2-1 in the quarter-finals played under closed gates to prevent any spectator misbehaviour. M Jethushan one of the icon player in this tournament has played a pivotal role in their victories scoring many goals making him their top goal scorer. They will be at full strength for this all-important do-or-die battle which is tipped to be a cliff hanger encounter.

On Sunday, Colombo FC one of the undefeated and favourite teams eyeing for the title will lock horns with Moragasmulla. Subsequently, they are the only side in the competition not to concede a single goal against them while scoring 18 goals in their favour, which is a tremendous achievement.

This record indicates their strength and how good they have been playing as a unit which rates them as the favourites of winning this game. Aiden Christopher one of their key players has become the cynosure of all eyes by scoring the highest number of goals for them. By evaluating their past performance, they are tipped to win this game convincingly. They defeated Java Lane (2-0), Ferguson Youth (4-0), Viking (7-0), and Slave Island XI (3-0) in the league stage games while having a 2-0 win over Maligawatte Youth in the quarter-final game.

Meanwhile, on the other hand, Moragasmulla too had fortunes favouring their way as they drew 1-all in their curtain-raiser against Black Square and went on to win over Baddowita United (3-2) and Colpetty United (1-0) before having a narrow escape against Renown by 4-3 after a penalty shootout. But past is past and all these teams would have done their homework well with the assistance of the coaching staff to identify the strength and weaknesses of their opponents to gear up for their big game which will enable only two teams to surge ahead to the grand finale on March 12

US$ 31 mn paid for diesel tanker

CCD hunt on to arrest suspects in kidney racket

Zoos to allow photos with animals at a price

Amendment is an urgent need

CCD hunt on to arrest suspects in kidney racket

Zoos to allow photos with animals at a price