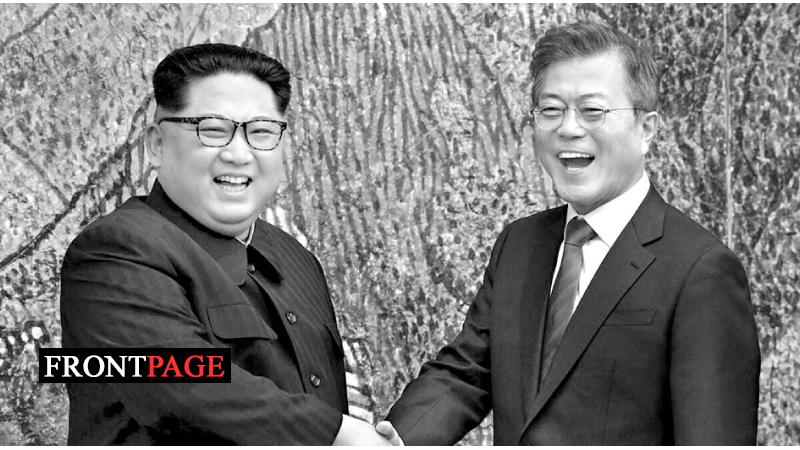 The exchange of letters came against a backdrop of strained cross-border ties since a failed North Korea-US summit in 2019, and flaring tension after Pyongyang launched intercontinental ballistic missiles (ICBMs) last month, breaking a self-imposed 2017 moratorium.

Moon sent a letter on Wednesday and promised to continue to try to lay a foundation for unification based on joint declarations reached at summits in 2018, despite the “difficult situation,” the North’s official KCNA news agency said. Moon’s office confirmed that he had exchanged “letters of friendship” with Kim.

In his letter, Moon said the “era of confrontation” should be overcome with dialogue, and that inter-Korean engagement is now a task for the next administration, spokeswoman Park Kyung-mee told a briefing. Moon also expressed hope for the swift resumption of US-North Korea denuclearisation talks.

Kim said in his reply on Thursday that their “historic” summits gave the people “hope for the future”, and the two agreed that ties would develop if both sides “make tireless efforts with hope,” KCNA reported. “Kim Jong Un appreciated the pains and effort taken by Moon Jae-in for the great cause of the nation until the last days of his term of office,” KCNA said, adding the exchange of letters was an “expression of their deep trust.”Moon staked his legacy on improving inter-Korean ties and helped arrange unprecedented meetings between Kim Jong Un and then US President Donald Trump in 2018 and 2019.

The three summits held by Kim and Moon in 2018 promised peace and reconciliation, but relations have deteriorated in recent years, with the North warning of destructive action and demolishing facilities built by South Korean firms for joint economic projects.

The two leaders briefly sought to mend ties last year through multiple exchanges of letters, but little progress has been made as Pyongyang criticised Seoul’s “double standards” over its weapons development.

Kim’s comments leave open the possibility of Moon playing a role as an envoy after he leaves office, but some analysts said the letters may not be all good news.

“I cannot claim to know of Kim’s personal intentions in sending the letter, but I don’t think it will have a positive impact on Moon’s reputation,” said Christopher Green, a Korea specialist at Leiden University in the Netherlands.

President-elect Yoon Suk-yeol takes office on May 10. He has said that he is open to dialogue with the North, but that greater military deterrence and closer ties with the United States are needed to counter Pyongyang’s provocations. – INDIAN EXPRESS

CID to probe ‘Podi Lassi’s’ activities under the Money…